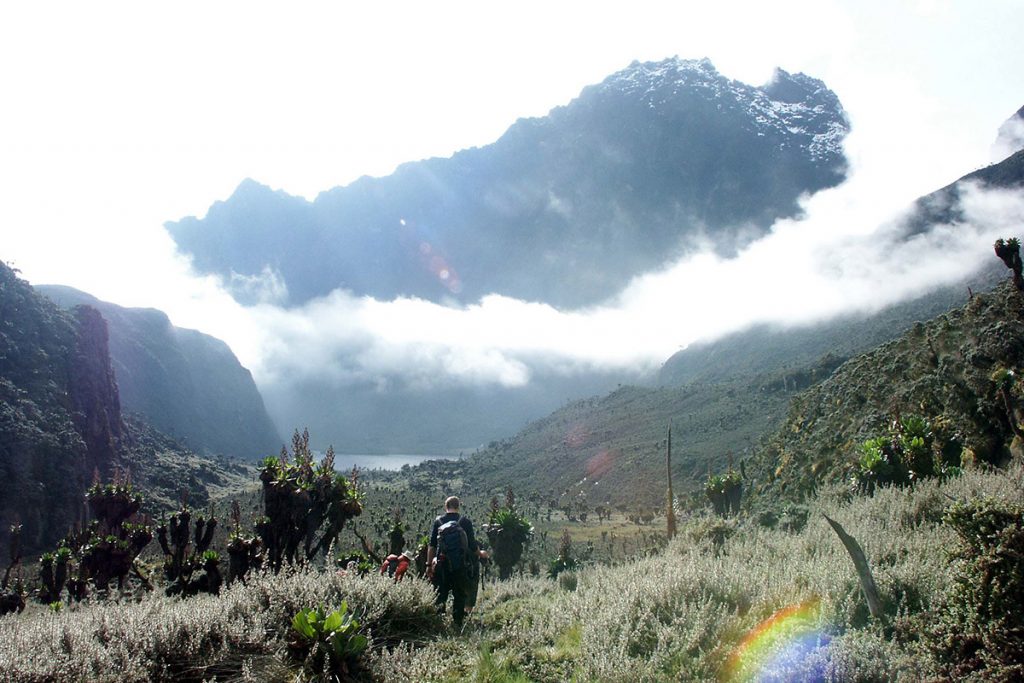 With this I have attached herewith our 7 Day Mountain Rwenzori Hiking  tour starts from with pickup from Entebbe and ends with a drop off back here at the end of the trip for your flight out, accommodation included and camping gear while at the mountain and other services as mentioned below.

After breakfast at the camp, you will go to RMS headquarters where you will be briefed about the whole hike. Start the hike from Nyakalengija through the Bakonzo settlements to mount Rwenzori national park gate where you will be registered before entering the park. You will start the central circuit trail trek through the thick tropical with high elephant grass and dense bushes.

This forest is a home to various animal species like forest elephant, chimpanzee, hyrax, black-and-white colobus, L’Hoest’s monkeys, duiker, and three-horned chameleon among many more. Some of the bird species include; Handsome Francolin, Rwenzori Turaco, Long-eared Owl, Barred Long-tailed Cuckoo, Cinnamon-chested Bee-eater, Strange Weaver, Archers’ Robin-chat, Rwenzori Batis among many others as well as various tree and plant species. You will expect to see some of them.

Have breakfast at the hut; you will move through thick shrubs and forest for about 30 minutes to the Kurt Shafer bright, which is at the confluence of the Mubuku and Bujuku rivers. You will then move though the bamboo mixed with montane forests and slippery moss covered rocks for a couple of hours. As you hike you will also expect to see various bird species that live in the forest.

You will continue to move up to Nyamulejju rock shelter where the first hikers used to at times camp and also spend the night, you will have a stopover here for lunch. At this point you will have a view of mount Stanley and mount Speke if the weather is clear. You will then continue to move through the alpine forest to John Matte hut where you will have dinner and spend the night. The hut is near river Bujuku and most hikers take a bath there, the water is so cold but so refreshing as well. You will also have a view of the Margherita glacier, which is on mount Stanley between Alexandra and Margherita peaks. Nyabitaba to John Matte is about 11km.

After breakfast at the hut, you will cross-river Bujuku and through forest to the lower bigo bog. This is a swampy area in a valley and is a home to the giant lobelias. This area used to be hardest part of the Rwenzori since the area is so boggy, jumping from one tussock to another was not so easy for most hikers more so females.

Currently, there is a walk board up to the end of the boggy area, which makes the walk much easier for trekkers. As you move you will expect to see giant lobelias, everlasting flowers and groundsels. You will then take a steep hike along a ridge, which will lead you to the start of the upper bigo bog. There is also a boardwalk up to Lake Bujuku. After the board walk you will try to move through the remaining small boggy area with no walk boards to Bujuku hut. At this point, you will have a view of Lake Bujuku, mount Speke, Mount Baker and mount Stanley. At this point you are able to ascend mount Speke and mount Stanley. Distance from john matte to Bujuku is about 5km. dinner and overnight at Bujuku.

The trail is then divided into two. The two trails, the left trail leads to Scott-Elliot pass descending to Kitandara Lakes while the right trailheads to the Elena Hut and on a steep trail above large boulders to Mt Stanley.

Elena hut is at the rocky part of Mount Stanley and the area is too cold. At this point, you are at the highest mountain of the Rwenzori and you will have a direct view of Mount Baker and Mount Speke. Sometimes it is hard to view these two mountains because they are covered by fog. Have dinner at Elena hut then spend the night.

This day you will have to wake up as early as 2am, Have breakfast at Elena hut, be ready in your warmest gear, put on your harness, warm hand gloves and headsock, have your headlamps and helmets and make sure you have sunglasses in the day pack on. Hike to the top of mount Stanley, Magherita peak, through the Stanley plateau. On steep rocky areas, you will use the ropes to help you move. The guide will teach you how to use the equipment while on the ice. On the glacial parts you will be required to use you, crampons, and ice axe.

After moving for a couple of hours after the Stanley plateau glacier, you will reach the bottom of the margherita glacier. This is the most challenging part of the entire hiking Rwenzori experience. You will hike through this glacier uo to the top of mount Stanley, margherita peak (5109m). At the top you will have a view of Ireen Lake, mount Speke and the surrounding environment. Then descend to Elena Hut for Lunch and later proceed to descend to Kitandara through the Scott Elliot pass to Kitandara, it is the most beautiful point of the Rwenzori. Have dinner at Kitandara then spend the night. If the group is big, you might spend another night at Elena hut and continue the following day.

If you do not wish to climb Mt. Stanley, you can combine days 4 and 5 into a single day by taking a different trail from the Bujuku Hut up to Scott-Elliot Pass. At the pass, there is a trail junction with one that goes up to the Elena Hut. The stretch of the trail just to the south of the pass is very rough, but after a short stretch, it becomes mellower and continues to Kitandara Lake Hut.

Have breakfast at Kitandara then move through the base of Mount Baker, which can be slippery so you will need to be so careful. From Kitandara, the trail ascends steeply up the headwall, spreading out from the base of Mount Baker and continuing along the south side of the Rwenzori Mountain to Fresh field pass. From the pass, the long muddy descent continues, passing the rock shelter at Bujangolo, the base camp for the historic expedition by the Duke of Abruzzi in 1906.This will take you around 5-7 hours then reach Guy Yeoman hut which is located at the banks of river Mubuku, have dinner and spend the night.

From Guy Yeoman, you will descend to Nyabitaba through the bamboo forests. The path down can be slippery and muddy with little to hold on to and requires careful balancing over the vertical mud or steep rock. After about 5 hours of trekking you will reach Nyabitaba hut where you will have a stopover for lunch. You will then continue to descend for more 3 hours to Nyakalengija.

Upon arrival at Nyakengija in the late evening, you may drive back to Kampala or plan an overnight stay in Kasese town, or go for other safari add on like gorilla trekking in Bwindi Impenetrable forest national park 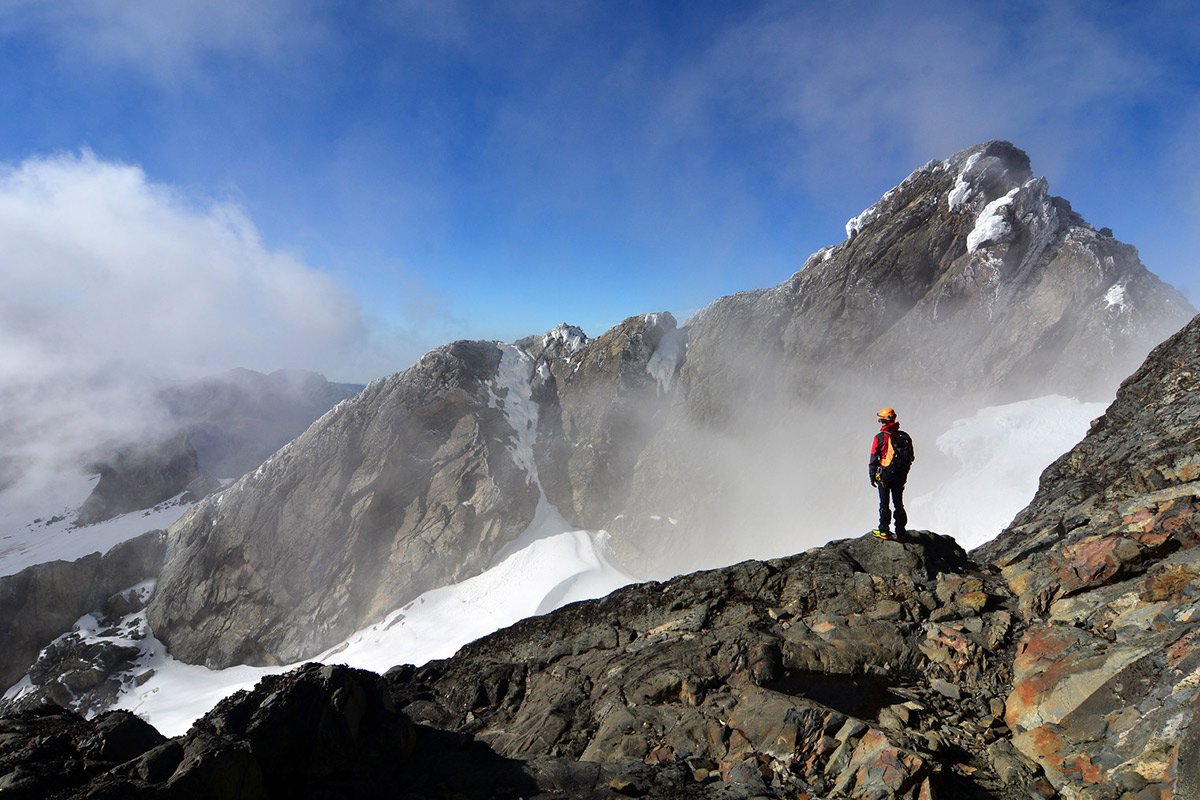 Experience one the most sought out adventure activities as you hike up to the top of the snow capped mountains. 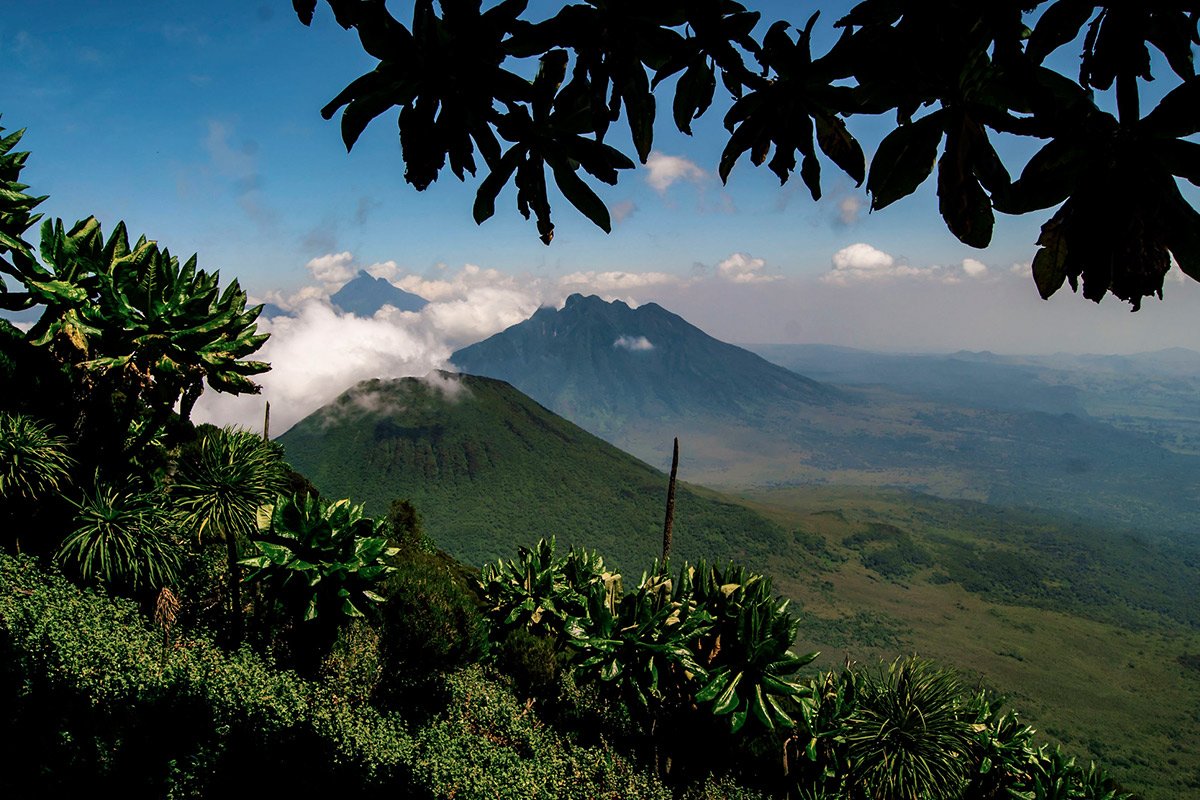 On this trip you will be able to Track Gorillas in Mgahinga N.P or Bwindi Impenetrable N. P and later hike Sabinyo Mountain 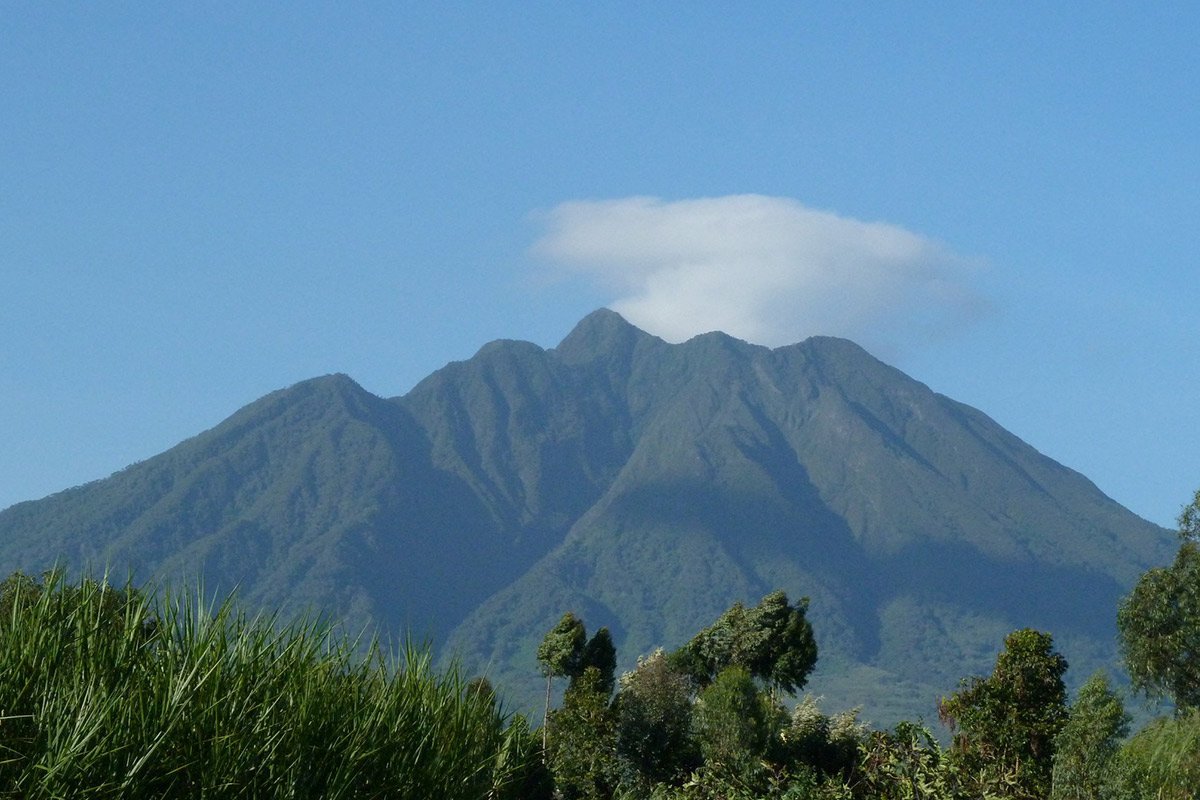 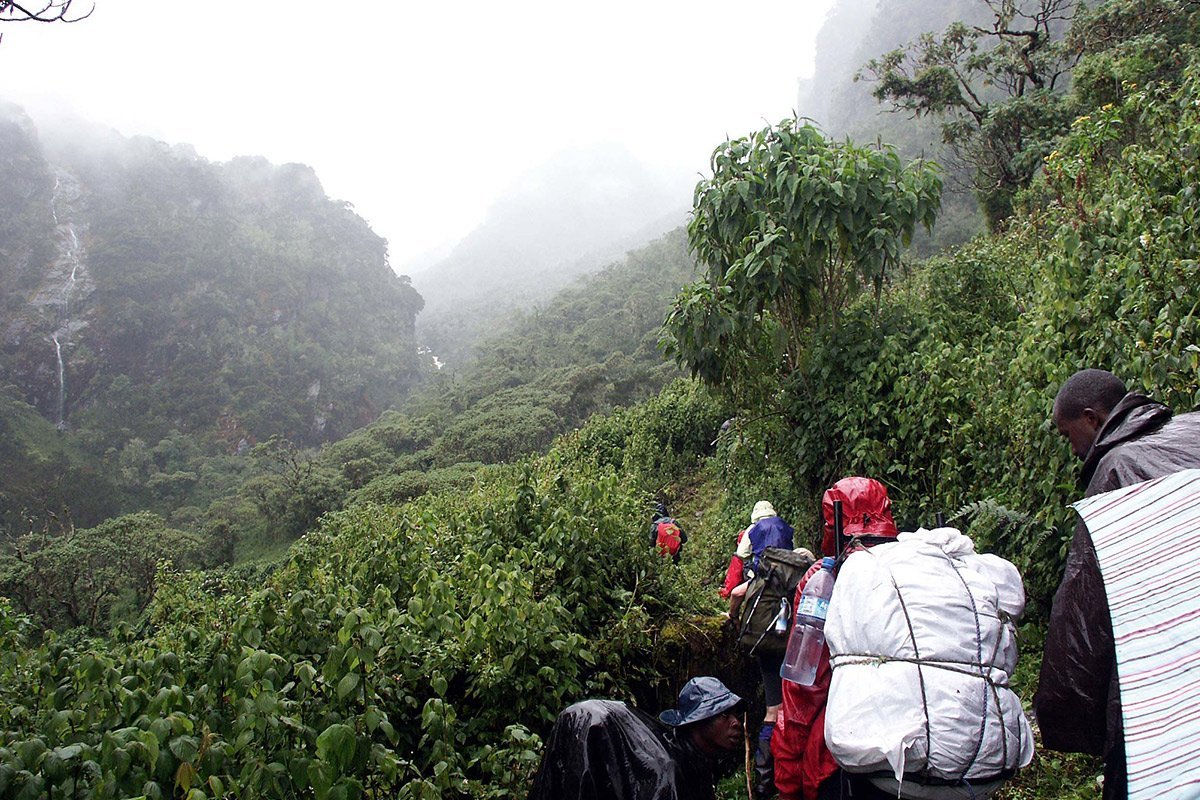 Explore the various peaks, This tour takes you up to the top of mount Stanley in the fastest way possible. 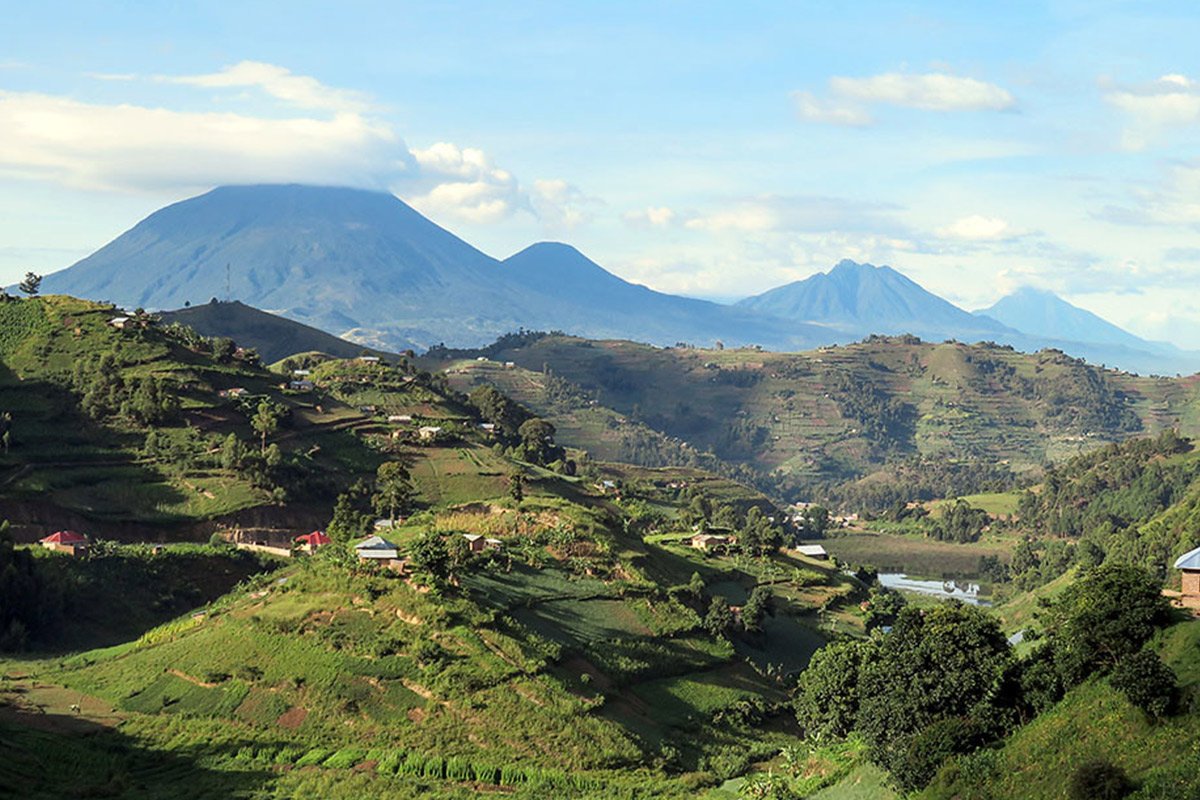 This trip will take you to mgahinga gorilla national park to hike mount sabinyo and later go to bwindi forest to track gorillas. 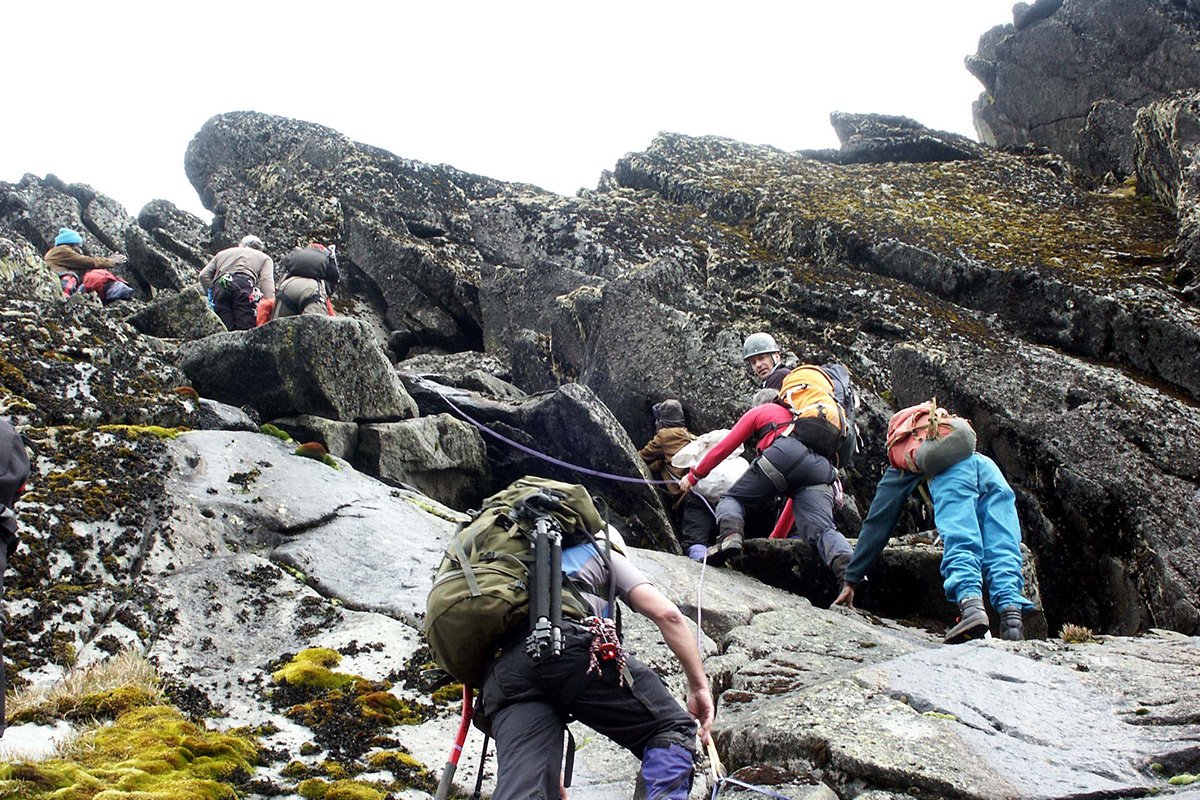 This tour takes you to Mountain Rwenzori National Park to hike up to the top of the snow capped mountains.