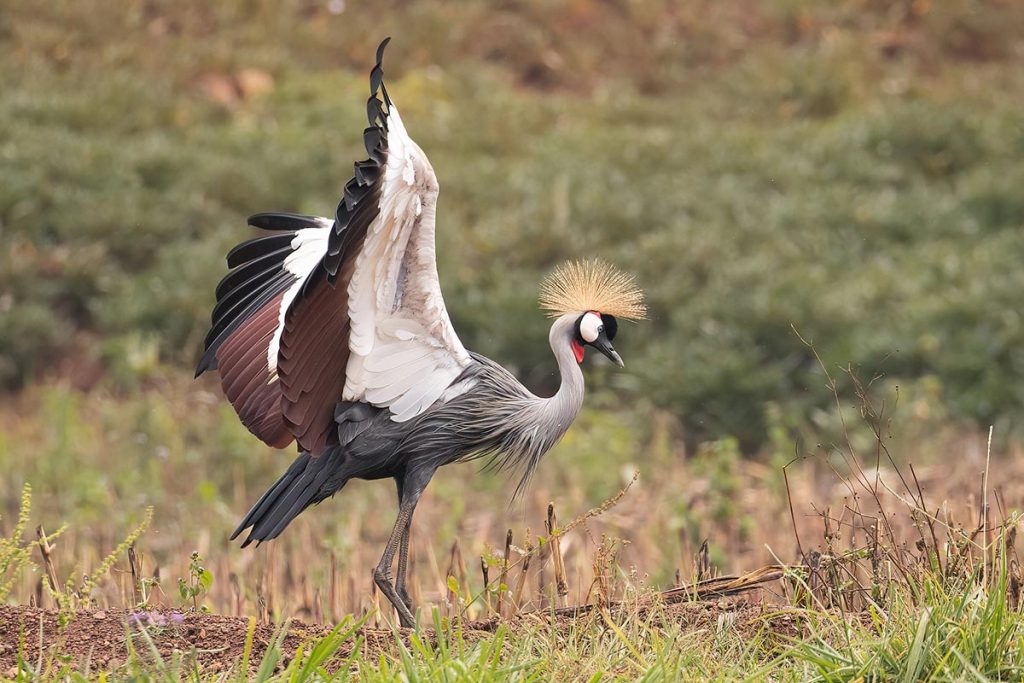 This 14 Days Uganda Birding and wildlife Safari is a magical journey into the isolated jungles of East Africa, promising you an experience of different bird species encounters like no other. This 14 Days Uganda Birding safari is a budget safari that is designed to allow every traveler interested in birding have a chance at spotting the different unique bird species Uganda has to offer.

Upon arrival, you will be met by Encounter Africa Safari guide who will transfer you to your overnight Guest house. Depending on your arrival time, you may choose to take a boat excursion to Ngamba Island (optional and not included), visit the nearby Botanical gardens or Uganda Wildlife Education center for a short excursion tour and birding.

After an early breakfast at the hotel, we will drive to Mabamba swamp, which is located on the shores of Lake Victoria, traditionally one of the few and best places to spot the rare and elusive shoebill stock in central Uganda.
The bird species that we expect to encounter here include the  Goliath Herons, White faced whistling Duck, White-winged Warbler, Lesser Jacana, Blue-breasted Bee-eater, Winding Cisticola, Yellow-backed, Golden-backed, Vieillot’s Black, Weyns’s and Orange weaver and Red-headed Lovebird among others. The birding at mabamba swamp, we normally use a canoe to maneuver through the thin pass in the swamp until we find the mabamba shoebill stock as well identify other bird species, which makes the whole activity exciting. After we will latter drive back to the guest house while birding on the way, arriving the hotel in the evening.

After breakfast, you will check out of the guest house and we will drive to Lake Mburo national park while birdingen-route, with stopovers at the Equator for photographs and equator experience and en-route lunch. We will proceed and make another stopover at Kaku swamp where we sometimes encounter species like the Black kite, the White-faced and Fulvous, whistling ducks, Common and Purple Swamphen, Lesser Moorhen, Hottentot Teals, Spur-winged and Egyptian Geese, Grey-crowned Cranes and Saddle-billed Storks, Grey wood Pecker, Dusky Blue, African Dusky, African Paradise, Red-bellied Paradise, Brown-throated Wattle-Eye, Arrow-marked, Black-lored and Brown Babblers, Lesser and Scaly-throated Honeyguide among others. You will then proceed on to Lake Mburo national park for overnight.

After your breakfast, with our parked lunch, we shall start our game drive/birding in Lake Mburo national park. This is one of the IBAs in Uganda, protecting more than 350 bird species, with specialties that includes; the Spot-franked, Double-toothed, Red-faced and Crested Barbets, Western-banded and Brown Snake-eagles, Trilling, Red-faced and TaboraCisticolas, Crested and Coqui Francolins, Chin-spot Baits, Broad- billed and Lilac-breasted Roller, Brown-chested Lapwing, Bare-faced Go-away Bird, Brown Parrot, Bateleur, and Emerald-spotted wood dove among others. We latter drive towards Rwonyo, and the lake side for our picnic lunch and later go for the boat cruise on lake Mburo.   Here we expect species like; the White-faced and Fulvous whistling ducks, White-backed and Black-crowned Night Herons, African Fin foot, African Darter, Rufous-bellied Heron, Papyrus Gonolek, Papyrus Yellow Warbler, Greater and Lesser Swamp Warbler, Common and Purple Swamphen, Lesser Moorhen, Spur-winged and Egyptian Geese, Grey-crowned Cranes, African Water Rail and Allen’s Gallinule among others. We later drive back to our lodge while birding on the way.

After breakfast at the lodge you will drive to Bwindi Impenetrable forest national park, you will have opportunities to stop along the way the way to spot some bird species as well as sightseeing, This journey takes you through the beautiful green rolling hills of southern Uganda with banana and tea plantations and good scenic views. Lunch will be served en route and you will arrive in Bwindi in the evening.

DAY 7: Birding to Buhoma through “The Neck”

This morning you will depart for Queen Elizabeth National Park, be prepared for some incredible scenery along the way as well as spotting some birds. You will arrive in time for Lunch at the lodge and game drive in the plains of Kasenyi in search for savannah wildlife including spotting bird different birds like the Red Chested, Diederik, and Klaas’s Cuckoo, Short-toed, Black-chested and Brown Snake-eagles, African white-backed, among others and savannah animals that may include herds of buffaloes, antelopes, elephants and if lucky, some wild cats such as lions and leopard.

The day begins early with an early morning breakfast, then with our parked lunch, we start our birding/game drive through the kasenyi plains. The park has more than 612 bird species recorded and this is said to be the highest concentration of bird life as compared to any nature reserve in the World. Here we expect sightings of bird species like; the Red Chested, Diederik, and Klaas’s Cuckoo, Short-toed, Black-chested and Brown Snake-eagles, African white-backed, Ruppel’s Griffon, Lappet-faced and Hooded Vultures, African Marsh, Eurasian Marsh, Pallid and Montagu’s Harrier, Wahlberg’s, Tawny, Long-crested and Martial Eagles, African Crake, Harlequin and Blue Quail, Common Button-quail, European Roller, Rufous-naped, White-tailed and Flappet Lark, Winding, Wing-snapping, Croaking, Trilling and Stout Cisticola,Temminck’s Courser, Vereaux’s Eagle-owl, Black-crowned Tchagra and Collared Pratincole among others. We drive towards Mweya peninsular, have our picnic lunch and then go for a boat cruise on Kazinga channel for yet another but deferent view of wildlife and birds. We then drive back to our lodge in the evening for dinner and overnight.

After breakfast, with our packed lunch, we check out of the lodge and drive to Maramagambo Forest for birding/nature walk in the forest. During the walk, we expect to encounter different bird species that includes; the Blue-breasted Kingfisher, Chestnut Wattle Eye, African Dusky, African Paradise, Red-bellied Paradise and Bedford’s Flycatchers,  African Golden oriole, Red headed blue bill, Bat hawks, Sulphur-breasted bush shrike, Brown-eared woodpecker, Fawn breasted Waxbill, Yellow-rumped, Yellow-fronted and Speckled Tinkerbirds, African Moustached, Garden,Willow and Dark-caped Yellow Warbler among others. We also expect to encounter different primate species like the Black and white Colobus monkey. Later in the afternoon we drive to Kibale Forest National Park, arriving in the evening and check in to the lodge for dinner and overnight.

Drive back to Entebbe international Airport and depending on your flight time, you may decide to have dinner and relax at the Lodge in Entebbe, marking the end of your 12 days Uganda Birding Safari.

This website uses cookies to improve your experience while you navigate through the website. Out of these cookies, the cookies that are categorized as necessary are stored on your browser as they are essential for the working of basic functionalities of the website. We also use third-party cookies that help us analyze and understand how you use this website. These cookies will be stored in your browser only with your consent. You also have the option to opt-out of these cookies. But opting out of some of these cookies may have an effect on your browsing experience.
Necessary Always Enabled
Necessary cookies are absolutely essential for the website to function properly. This category only includes cookies that ensures basic functionalities and security features of the website. These cookies do not store any personal information.
Non-necessary
Any cookies that may not be particularly necessary for the website to function and is used specifically to collect user personal data via analytics, ads, other embedded contents are termed as non-necessary cookies. It is mandatory to procure user consent prior to running these cookies on your website.
SAVE & ACCEPT
error: Content is protected !!
Start chat
1
Let's chat!
Powered by
Hey there,
We would like to help you put together a great African trip. Hit this button to start the conversation!